‘Jewel in the crown’ for The Shakespeare North Playhouse 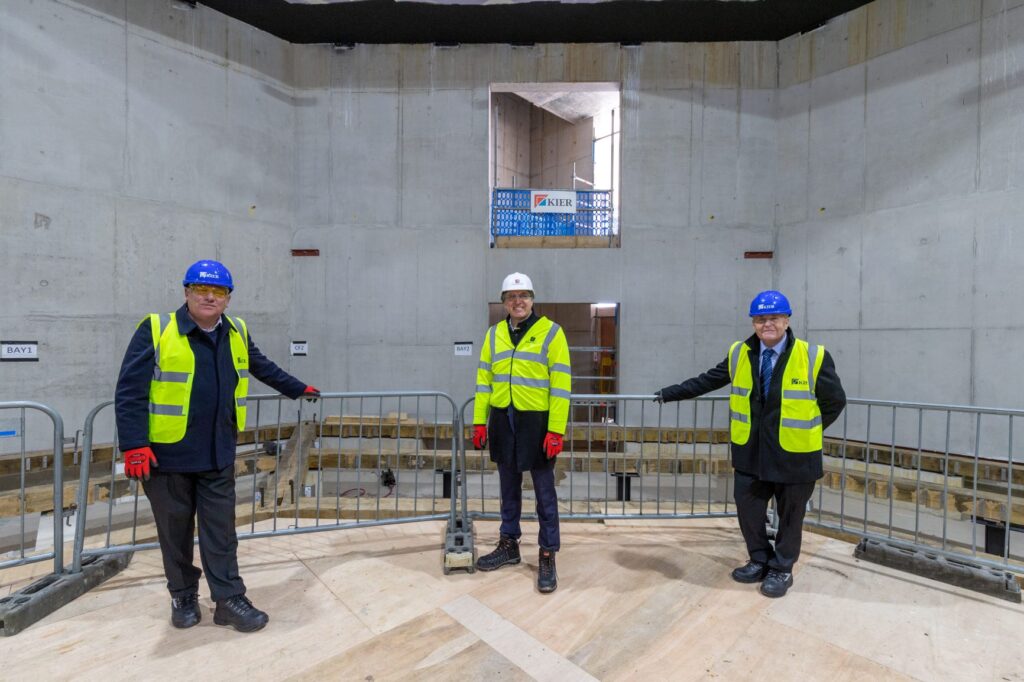 An historic milestone has been reached in the construction of The Shakespeare North Playhouse in Prescot as the installation of the timber frame theatre has begun.

For over a year, timber specialists, McCurdy and Co have been fabricating and preparing the solid oak pieces that will form the theatre itself and will create the ‘jewel in the crown’ of the building.

Work has now started to install the extraordinary oak framed theatre, which is based on the iconic 17th century ‘cockpit-in-court’ design and will have capacity for between 320 and 472 seats.

The unique architecture of the space will provide the perfect environment for contemporary, dynamic theatre-making. Alongside high-profile Shakespearean drama, The Shakespeare North Playhouse will host a variety of comedy, music and theatre performances. 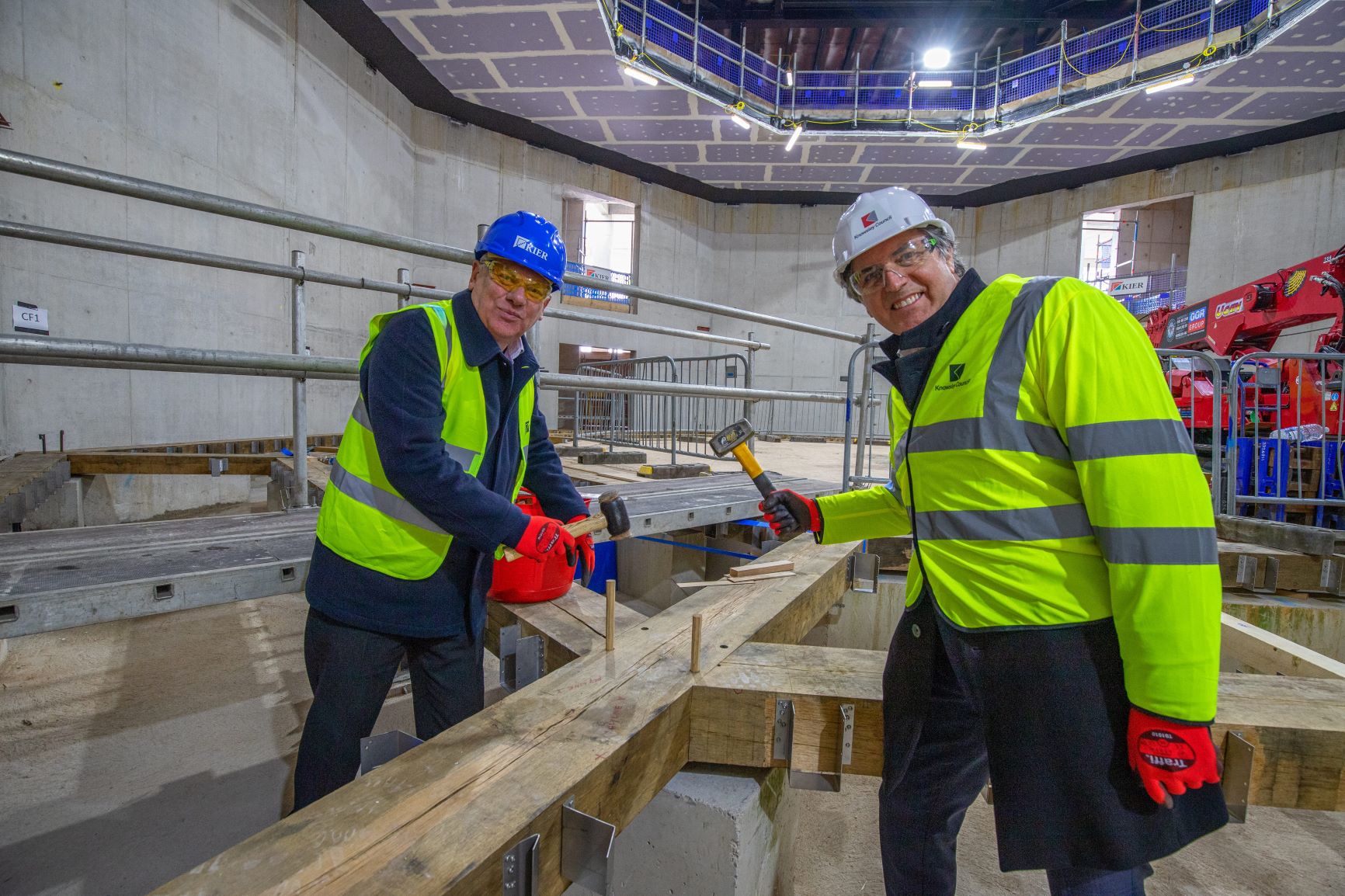 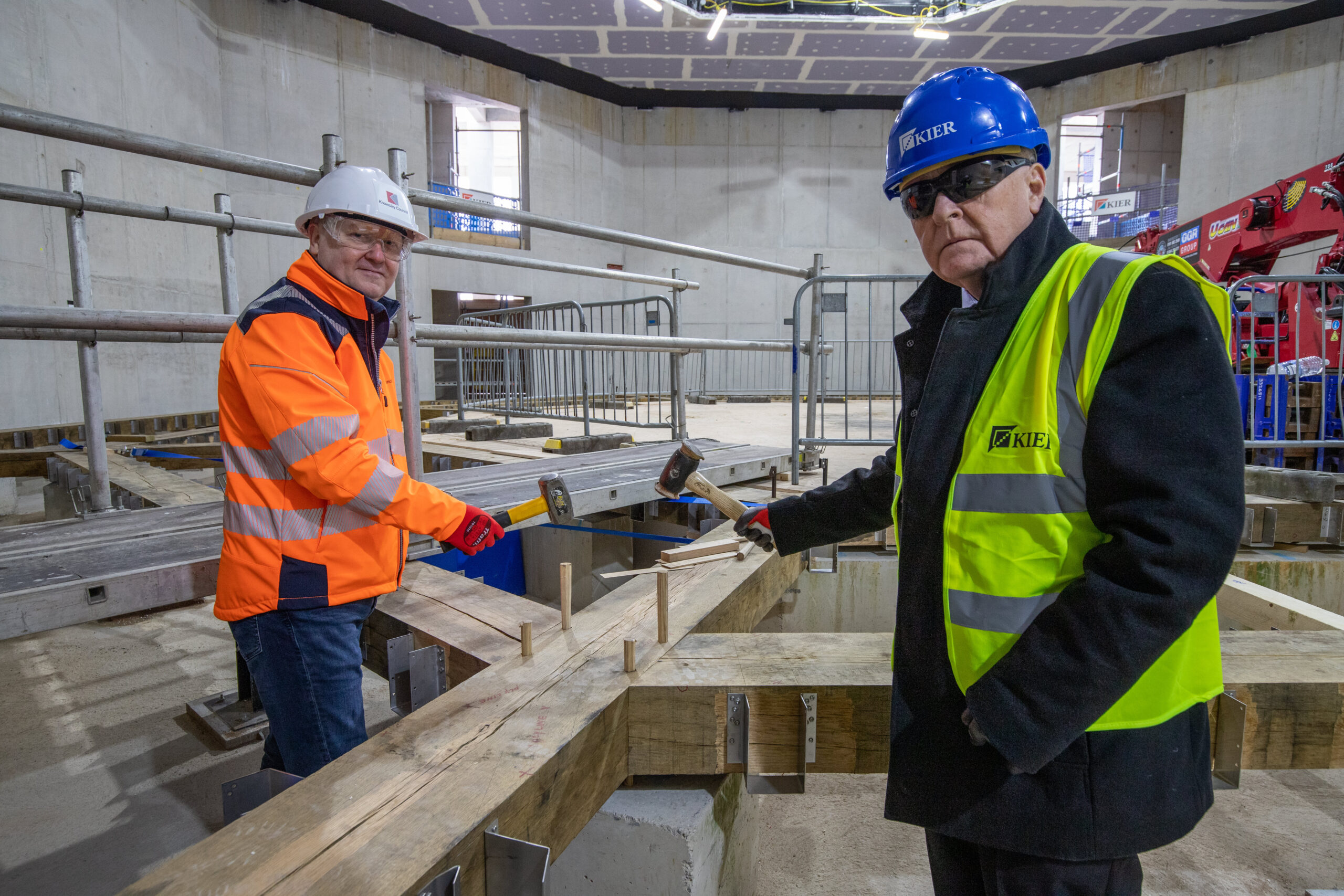 While on site, Cllr Morgan, Cllr Brennan, the Chief Executive and the Metro Mayor met Peter and Dominic from McCurdy and Co. who explained the installation process and their unique work to create this masterpiece. They also had the opportunity get involved in the traditional installation techniques by hammering pegs into the timber frame.

Cllr Graham Morgan said: “It has been over 12 months since I was last on site, so I was delighted to see how much amazing progress has been made, despite the challenges presented by the pandemic. It was a real honour to be able to mark the start of the installation of the theatre, this is such a momentous occasion for the project as this will be the heart of the Playhouse. This will be the place where many performances take place and where the audiences will actually sit as they watch and enjoy those performances. And we don’t have too long to wait for that moment. Next year, people from Prescot, other Knowsley communities and the wider North West area will be taking their seats in this amazing theatre at The Shakespeare North Playhouse.” 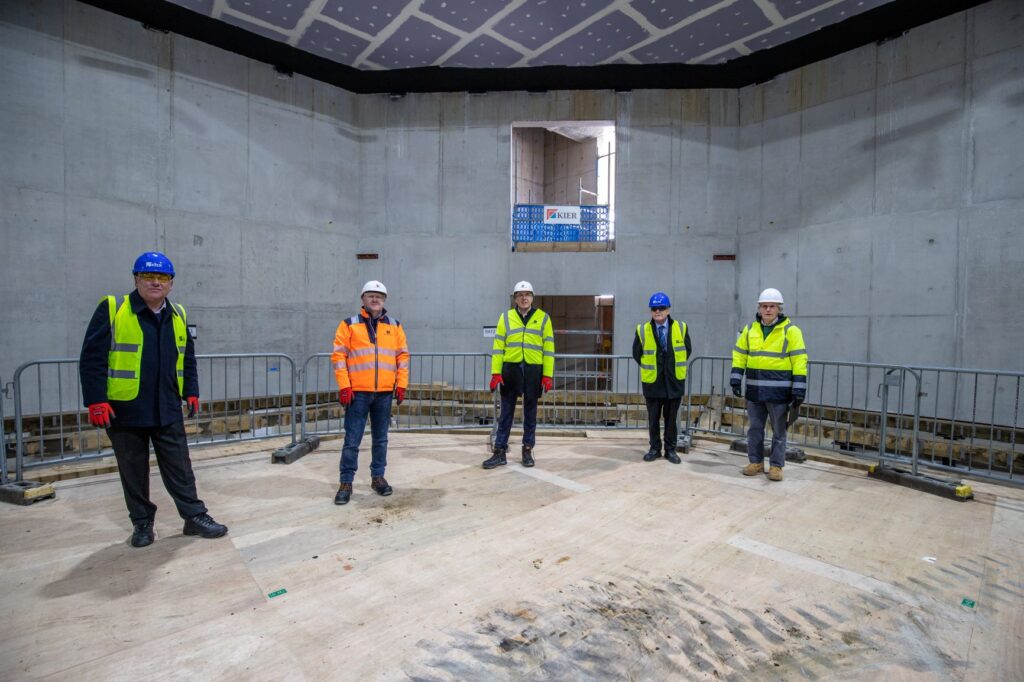 Steve Rotheram, Metro Mayor of the Liverpool City Region said: “The Liverpool City Region is the country’s cultural capital and we’re investing in projects like Shakespeare North to make sure we stay the best. We’ve put more than £10m into the new theatre and invested another £8m in Prescot station to improve things for visitors and rail users.

“The Playhouse will offer so many opportunities to the area – new jobs, more visitors and will be a fantastic resource for local schools.

“It was great to get along and see how much progress has been made on site – especially given the difficulties caused by the pandemic. It’s brilliant to think that this time next year, it’ll be open, and we’ll have people flocking here to watch performances.

The opening of this once in a lifetime cultural development will be a will be a key highlight of Knowsley’s year as Liverpool City Region Borough of Culture.

Even before it is completed, the Playhouse is already having a significant impact on the local area with new high street business moving to Prescot, 1500 new homes being built in the area and significant investment in public realm and connectivity improvements.

The Playhouse is expected to attract more than 100,000 visitors each year once established, bringing a boost of more than £5.3 million to GVA and a range of employment opportunities linked to the project.

The Shakespeare North Playhouse has successfully secured funding from Knowsley council (£12m), central government (£5m) and the Liverpool City Region Combined Authority (£10.5m). It was recently awarded a £3m Capital Kickstart Grant as part of the government’s funding package to help protect the UK’s culture and heritage sector from the economic impact of COVID-19. Alongside this public sector support, the project has also secured contributions from two national grant making trusts (Garfield Weston and the Foyle Foundation) and a major donation of £700,000 from the Sir Ken Dodd Charitable Foundation Trust. In addition, individuals and companies can donate online, sign up to a direct debit contribution or donate via the Knowsley Chamber 100 Club.