Leading lights from the world of theatre and the arts, as well as prominent politicians, gathered to lend their support to Knowsley’s new Shakespeare North Playhouse at an event held in Parliament today.

VIP guests including multi award-winning actress Dame Judi Dench were welcomed to the event by Knowsley MP Sir George Howarth. Those in attendance were given an update on this major cultural project that is now under construction in Prescot.

When complete, the flexible 320 to 380-seat Playhouse, modelled on the cockpit-in-court design of the 17th century will complete a ‘Shakespearean Triangle’ – London, Stratford-Upon-Avon and Prescot. It will also provide cradle to grave learning opportunities, an outdoor performance garden, ‘black box’ studio theatre, exhibition centre and visitor attraction. 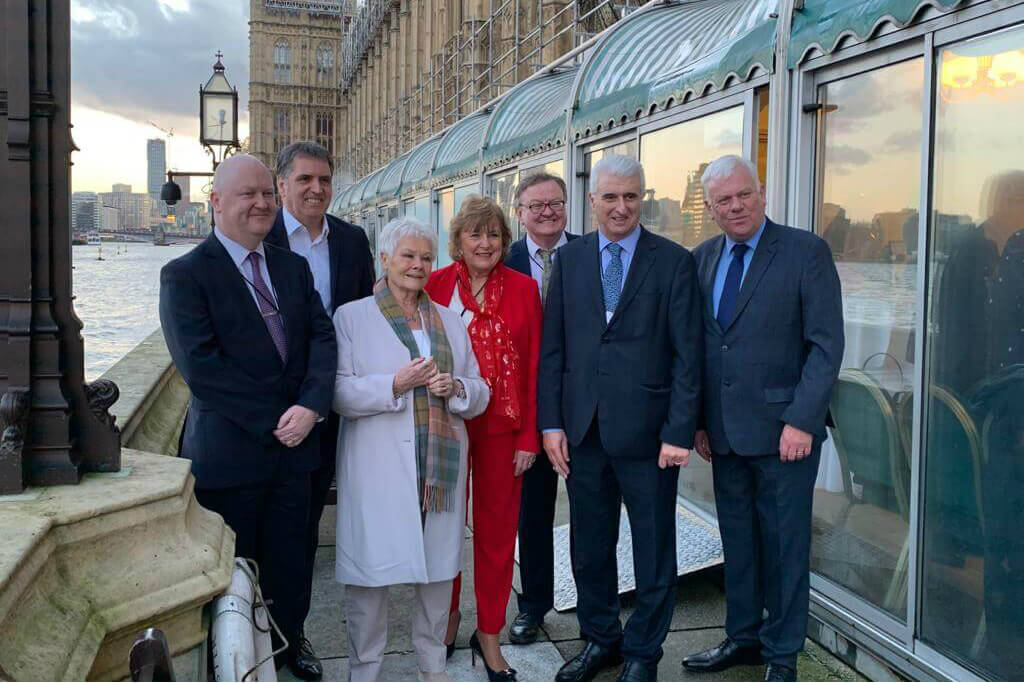 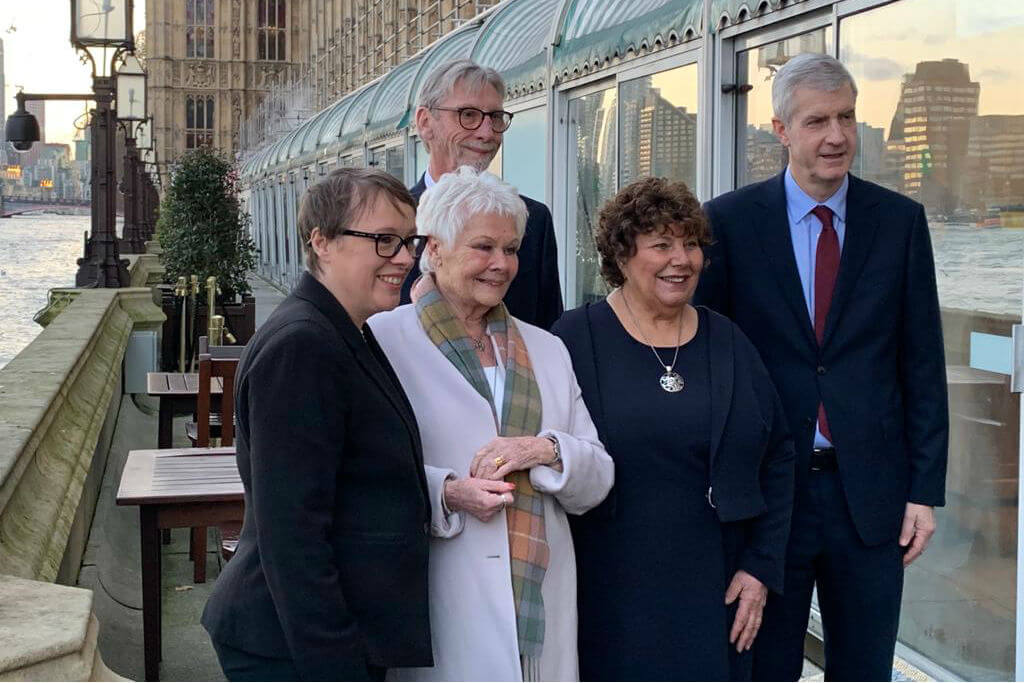 With only a couple of years to go until opening night, the Playhouse is currently creating a real buzz in the world of theatre and performing arts with a number of recognisable faces supporting the project. They include Knowsley actor Josh Bolt, screenwriter Frank Cottrell-Boyce and Lady Anne Dodd, the wife of the late Sir Ken Dodd, whose generous donation from the Ken Dodd Charitable Trust will create an outdoor Performance Garden at the Playhouse.

Max Steinberg CBE is Chair of the Shakespeare North Trust. He said

“The Shakespeare North Playhouse is not only set to transform Prescot but also become a regionally, nationally and internationally significant attraction. Spreading the message about the Playhouse is a major priority for us so it seems only fitting that we bring this project to London and to the historic Palace of Westminster.

“Thanks to the ongoing support of Knowsley MP Sir George Howarth, we have been able to bring together leading figures from the world of theatre, literature and the arts – many of whom are based in London and have national and international connections.

“My challenge to all those attending today was to help us spread the message far and wide that the Playhouse is happening and it is happening in Prescot. And of course, to have Dame Judi here to support us has been just wonderful.”

Bringing the love of language to a new generation

Dame Judi Dench is a Patron of the Shakespeare North Trust and a keen supporter of the project. She said:

“I am delighted to have been able to come along today and share in the excitement that is clearly building in advance of the theatre being built. As a long standing supporter of this project I am thrilled to see such positive progress being made and the support that is clearly evident.

“It is no secret that I am absolutely passionate about Shakespeare and his work and the idea of bringing this love of language to a new generation and to communities in the north of England is something I am completely behind.

“My own career was inspired by visits to the theatre in Stratford-upon-Avon as a child and I think it is wonderful to imagine today’s young people being inspired in the same way. This project will be much more than ‘just’ a theatre and its impact will be seen for generations to come. I am thrilled to be able to support it.” 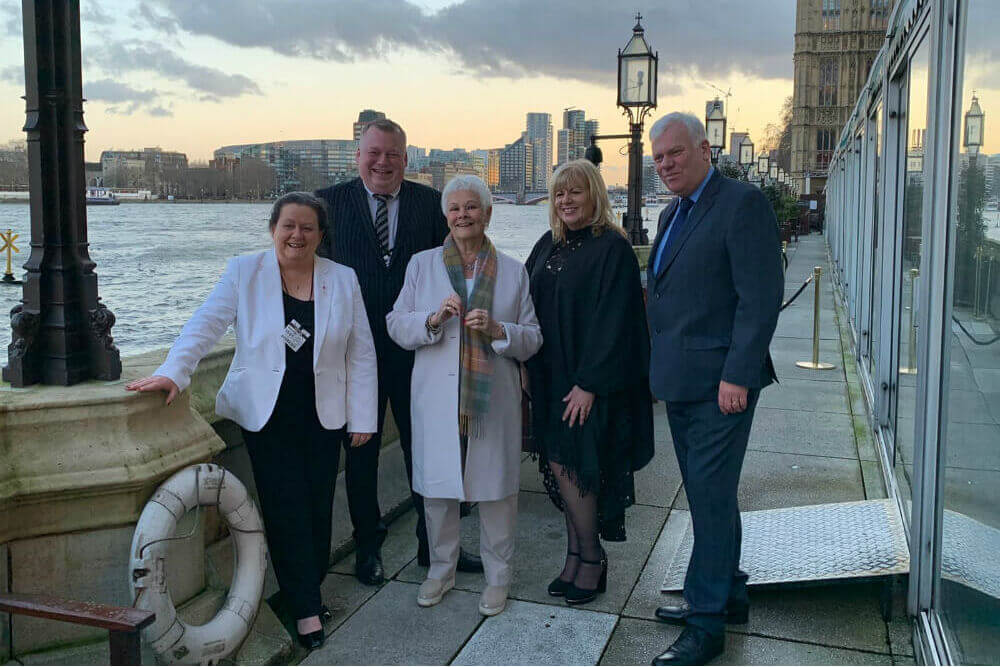 An inclusive venue with a regenerative impact

Due to open its doors in 2022, The Playhouse will be an inclusive venue which will not only host high profile Shakespearean drama but also a variety of comedy, music and theatre performances.  Attracting people from around the globe, the Playhouse is expected to welcome more than 140,000 visitors per annum and inject £10 million into the local economy through secondary spend.

Already the regenerative impact of the project can be clearly seen in Prescot. Sir George Howarth MP commented:

“It is quite remarkable to see the impact the Playhouse is having on Prescot, even before the very first brick is laid. New bars and restaurants are opening and sense of positivity and optimism is tangible.

“Along with Knowsley Council, I was always confident that if we raised the capital needed for this project, the impact it would have would be incredible. That positive change is already underway and it’s something I am very excited to see develop even further.”

The majority of the funding for the Shakespeare North Playhouse project is coming from Knowsley Council with support from the Liverpool City Region Combined Authority and central Government. Alongside this, more than £1 million of philanthropic funding has been secured, including a major contribution from the Ken Dodd Charitable Foundation Trust.

The opening of the theatre in 2022 will coincide with Knowsley’s year as Liverpool City Region Borough of Culture.

Give your support to this exciting, once in a generation project.