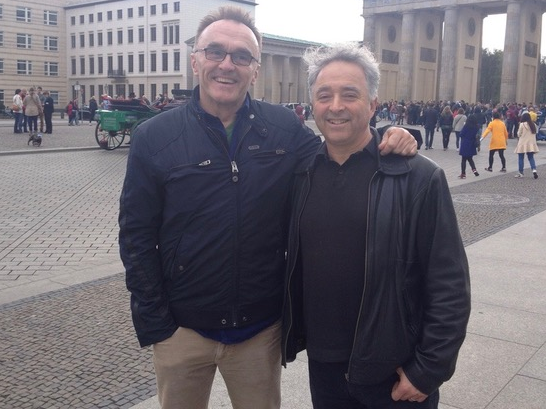 The creative masterminds behind the renowned London Olympic’s opening ceremony, are teaming up once more – this time in honour of The Shakespeare North Playhouse in Prescot.

Multi-award-winning Director and Producer Danny Boyle, and award-winning writer Frank Cottrell-Boyce have both signed up to act as Special Advisors for The Playhouse which will open to the public in 2022.

As Special Advisors both Danny and Frank will bring to bear their extensive expertise across the arts and entertainment industry. They will utilise their own experience and learning of what captivates and enthrals audiences, to help shape The Playhouse’s own artistic programme.

Frank is already an active supporter of the project and most recently helped to launch a national young person’s playwriting competition for the Playhouse, in partnership with the BBC (The One Show’s As You Write It). Frank’s own credentials as a screenwriter and novelist are well known, as is his particular success as a writer of children’s literature. He commented:

“Speaking as someone who grew up just a stone’s throw from where this wonderful new theatre will be built, I really couldn’t be more excited. The Playhouse will be such an amazing asset for the area and for all the people living here too.

Theatre and the arts have such an amazing ability to bring people together and create such joy – no matter what your age or background. I still consider myself a local lad, so I could not be more thrilled to be so closely involved with this project and to be able to help shape what I am sure will be a fantastic programme of events.”

Frank and Danny have collaborated on a number of hugely successful projects including the opening ceremony of the Olympic games in London in 2012. The ceremony, part of which was based on Shakespeare’s The Tempest, aimed to celebrate Britain’s social & cultural history. The event which was widely acclaimed is probably best known for featuring everything from black cabs to Paul McCartney; the NHS to James Bond and HRH Queen Elizabeth herself.

This, was just one highlight from a much longer career in which Danny Boyle is most famous for directing major Hollywood films including Trainspotting, The Beach and Slumdog Millionaire, for which he was named Best Director at the Academy Awards. Despite huge success and multiple awards for his film work, Danny started his career in the theatre. He said:

“When Frank spoke to me about The Playhouse, I jumped at the opportunity to get more involved. I started my professional life in the theatre and love the excitement of live performance. I hope I can share some of my experience to benefit the project but I also hope I might learn something new along the way.

“I am absolutely delighted to have Frank and Danny offer their expertise and experience to the project. They are both creative geniuses, in their own right, and clearly when they come together, magic happens. We are very lucky to have their support and honoured that both would choose The Playhouse as a project they want to be involved with.”

The Shakespeare North Playhouse is currently under construction and is due to open to the public in 2022.  At the centre of the new building will be a flexible theatre with capacity for between 320 and 472 seats, based on the iconic 17th century ‘cockpit-in-court’ design. This is particularly apt as Prescot was the only place outside London to have a purpose built theatre in Elizabethan times. This fact, and the areas fascinating links – via the Earls of Derby – to Shakespeare himself has paved the way for this major cultural development.

The Playhouse will also include an education programme, an exhibition and visitor centre and additional performance spaces including an outdoor performance garden dedicated to the late Sir Ken Dodd.